QCM and The Insane Asylum


Pueblo CO. October 3, 2015 -- Quantum Creative Media would like to introduce one of our favorite clients, the folks who run the Museum at the Colorado Mental Health Institution at Pueblo -- Bob and Nell Mitchell. The Mitchell's have made the up-keep of the museum at The Insane Asylum (formally known as) a mission of love. Each time they come in with their latest project, we are constantly amazed with their ideas for furthering the awareness and education about the artifacts and life of former patients.

One of the first projects they brought to us was developing a presentation where Nell wrote the narrative and we recorded both Bob and Nell doing the narration. There was also a map of the extensive tunnel system under the Asylum campus that they wanted to have made into a nice display. We developed a rather instructional graphic design, highlighting all the tunnels and adding old photos in the margins so the reader can capture the feel of these underground rivers of activity. Nell has also has written a book about the history of the Colorado Mental Health Institution at Pueblo (as it is now called).

The Colorado Mental Health Institution at Pueblo was founded in 1879. This institution has been through many changes over the years and has seen the development of mental healthcare to the paradigm we know today. This facility first began as simple "housing" of the mentally ill to a more institutional setting. From the institutional setting it moved into a "cottage" paradigm. The cottage paradigm suffered from over crowing and necessitated a shift to a much more structured model as reflected by the architecture in the newer buildings. Food and goods were transported through the extensive tunnel system under the acreage where upon this institution sits. 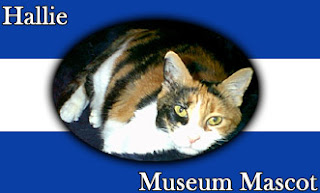 This is just a taste of what you will find at the museum. We let Bob and Nell take you on a tour of a time long ago at the Insane Asylum.
If you ever find yourself in Pueblo, Colorado - stop by this fascinating museum and meet Bob and Nell. They will make the history of this institution come alive.
You can download a copy of their brochure on their website for location and hours of operation
http://www.cmhipmuseum.org/
Posted by AOW at 12:24 PM