Pueblo, CO Sept. 23, 2015 -- Quantum Creative Media has a new vehicle graphics project! This project entails decking out an ambulance that was purchased by Jori Pollard, with the vision of converting it into a mobile, dog training unit.

Jori stated that she had been eyeing this ambulance on a used car lot. She said she thought is was being repaired but it sat there for weeks. Finally, she inquired about the ambulance and it was for sale! "I had to do it." she stated.

Jori invested some time and money, installing an AC unit and an awning to make her clients and their pets much more comfortable. The only thing left
to add were the graphics. The graphic design was a little tricky due to the color of the vehicle being red and dodging all the lights and such. We really wanted her message to pop. 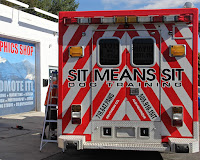 Jori came to pick up her new vehicle today. She walked around it slowly as a very big smile lit up her face. "I'm stoked! I really love it. It's bad looking!" As she cranked up the big diesel engine and pulled out, already we could see people turning their heads to take a gander at this statement piece.

We, at Quantum Creative Media, wish Jori and Sit Means Sit the best of luck in her business ventures! Quite a lady with a very unique vision.

This is our gift to you. The Strangest Secret. This is the philosophy of QCM.
Wishing you and yours great success and happiness,
Quantum Creative Media
Posted by AOW at 7:40 PM No comments: 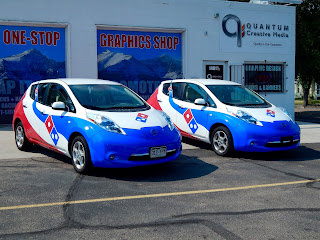 PUEBLO, Colorado. - Sept. 15, 2015 - Domino’s is going electric! Tony Mand has had the innovative insight to reduce the carbon monoxide emissions in the towns where his pizza delivery facilities reside. Not only did he purchase a fleet of Nissan, no emissions, Leaf vehicles he is having them wrapped by Quantum Wraps in the eye-catching red, white and blue Domino’s logo.

Vehicle wraps are becoming a popular and cost effective way to advertise one’s business, hobby or interest. Wrapping a vehicle increases your R.O.I. (return on investment). In a recent Trucking Association’s study of vehicle occupants and pedestrians, 98% said vehicle graphics created a positive image for the company. 96% said vehicle graphics had more impact than billboards. 75% of people developed an impression about a company and its products. 29% would base a buying decision on that impression.

Quantum Creative Media owner, Douglas Howard, stated, “We need to do something to thank business owners like Tony Mand who show community responsibility by doing what they can. Domino’s is improving the lives of their employees by reducing the wear and tear on their personal vehicles while contributing to the air quality of the community as a whole.”

I have a teenage daughter. The perpetual quest for teenagers is to be unique - original. However, it is the "forest for the trees" scenario. In the great search for uniqueness, I find that teenagers all look astoundingly similar (for the most part). They dress  alike, talk alike, music interests are very similar, watch the same shows and roll their eyes up in their heads when this observation is pointed out. What is even more disturbing is that we carry this behavior into adulthood. Worse yet, we steep our business practices in this philosophy of keeping the status quo, not venturing too far from the norm and relying on trends to give us an illusion of being unique.  As Earl Nightingale once said, "We play the game of follow the follower." He goes on to say, "If everyone is doing it, then do the opposite and you will be successful." (from the short film The Strangest Secret by Earl Nightingale, 1970)

What does being original mean?
Are you playing the game of follow the follower? In his short film The Greatest Secret, Earl Nightingale tells a story of a man who who used to stop in front of a jewelry store and set his watch by the large timepiece hanging outside. One day, the owner of the shop was sweeping outside his shop when he noticed this man adjusting his watch. The owner asked him, "I have seen you stop and set your watch by my clock for years. May I ask why?" The man replied, "I am the foreman at the plant down the street and part of my job is to sound the whistle when work ends for the day." "Well," said the jeweler with a puzzled look, "I set my clock by the factory whistle I hear every day." This little tales holds a double whammy. First, it is a prime example of following the follower but even more detrimental is that neither one of the gentlemen stopped to check their source of information! Delve deep into where you are getting your information from and you may just be surprised to find out that the man who gives you all your financial advice has had his office in a little hole on the poorest side of town for years.

Following Trends Creates an Illusion of Uniqueness
Another follow the follower trend is to have a Life-Coach. I had a friend who was a Life Coach. I used to rib her a bit about it because her life was a mess! " And people pay you to give them advice?" I used to ask her incredulously.  She stated, "Well, I have you to keep me grounded." I promptly replied, "So where is my money?" If your Life Coach lives in your neighborhood, you might want to up-grade to a person who lives in a part of town that you would like to live in one day. Another bit of advice; make sure they ran a very successful business before they became a Life Coach. Research your sources or you are no better than the man Earl Nightingale made reference to who set his watch by another man's mistaken source of time accuracy .

Quantum Creative Media started operations in the basement of Douglas Howard's home. Douglas graduated from the Art Institute of Dallas and held a corporate position as a graphic designer for a very large operation in Denver, Colorado.  He observed, first hand, the following of the follower. The situation became so disturbing that he did something about it. He quit his position with all the comforts of a steady "job" and ventured to create something unique -- a place where art and creativity is only limited by his customers' imagination. As the old saying goes, "If it were easy, everyone would do it." It has only been two and a half years since he jumped off that cliff and Quantum Creative Media has gone from the basement of his home to a comfortable facility with clean bays, employees for who art is a passion and customer service that is truly amazing. The growth has been steady and there are dreams yet to be fulfilled. Douglas broke away from following the followers and is now leading a company that has a unique vision of art and customer service; beautifying towns and cities one sign, vehicle, business and website at a time.
Posted by AOW at 7:37 PM No comments: